Socio-Technical Artifact of the Month!

We have a new socio-technical artifact of the month! Congratulations to this 10-level steel wheelchair ramp in West Dunbartonshire, Scotland! 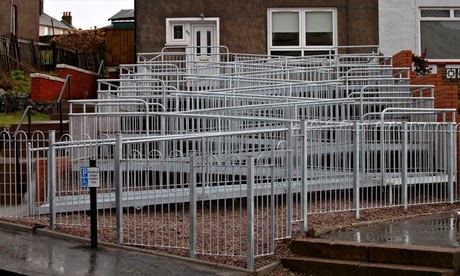 The picture comes courtesy of the Guardian, who related this fascinating story of accessible design.

See the previous winner of the socio-technical artifact of the month here.
Posted by Interboro Partners at 7:50 PM No comments:

In our forthcoming book, we have essays about the secret, exclusionary life of FIRE ZONES and FIRE HYDRANTS; now it looks like we might have to add an essay about the secret, exclusionary life of FIRE itself. As the NYTimes reports, a developer is trying to build a $15 million, four-story, low(er)-income housing development "in a weed-covered, third-of-an-acre patch . . . squeezed between Metro-North Railroad tracks, an exit ramp off the Saw Mill Parkway and a stone bridge over the tracks." This would be interesting and arsenal of exclusion-worthy in and of itself, but the weapon in this case makes it an instant arsenal classic. Why can't this project be built? "The building inspector, William J. Maskiell, contends the site is hazardous because there is insufficient width around some sides of the building for fire ladders to gain access. He and the fire chief, Russell Maitland, also argue that an arched stone overpass leading to the site is too low to permit the largest fire trucks to pass." The developer made the obvious point that indeed few apartment buildings have access on all four sides. It's not too hard to see through this one. Hopefully the The Hudson Valley Board of Review will too when it hears the case in April.

For other posts about affordable housing projects facing opposition in other wealthy towns here, here, and here).
Posted by Interboro Partners at 7:42 PM 1 comment: