One thing we always emphasize when talking about the Arsenal of Exclusion & Inclusion is the fact that the entries have little meaning apart from how they are used. With the exception of things like BOMBS, entries in the Arsenal can usually go either way: they can exclude and include. This isn't just true of weapons like PUBLIC HOUSING, which theoretically opens the city to the poor but which in most cities was used as a means to foster racial segregation; it's true of weapons like RACIAL AND RELIGIOUS COVENANTS, which in at least one case (Baltimore's Morgan Park) were used by African Americans to build an affluent, vibrant, non-redlined neighborhood in the suburbs.
But one thing we rarely emphasize--and haven't written about--is the fact that our attitudes about openness in our cities can be so conflicting. This thought was provoked by this amazing window display in a real estate office near our office on Flatbush Avenue that caught our attention yesterday: 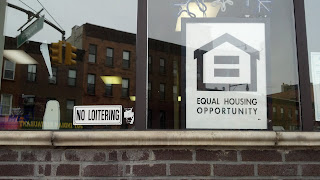