Relman, Dane, & Colfax is a pretty righteous law practice. Their cases are pretty good fodder for The Arsenal of Exclusion, based as they are on one or another evil, exclusionary weapon (for example, the BLOOD RELATIVE ORDINANCE). One of the cases featured on their website today is Kennedy v. City of Zanesville, which centers on a predominantly white county that for decades has refused to service an African-American neighborhood with water. From the Relman website: "The sixty-seven plaintiffs in the case had alleged that the City of Zanesville, Muskingum County, and the East Muskingum Water Authority refused to provide them public water service for over fifty years because they live in Coal Run, the one predominately African-American neighborhood in a virtually all-white county. The Coal Run plaintiffs live within one mile of public water lines alongside the Zanesville city limits, but were denied public water service for nearly fifty years. As a result, they had to haul water from the city, collect rainwater, and store water in cisterns, where it often became dangerous for consumption. During the same time period, white residents on the same street were provided with water."
To paraphrase a talking head from a video about the case: "This is something out of the 1940s."
The tactics didn't necessarily have the effect of uprooting the community, but it did make life difficult in it (the community is called "Coal Run" because it is between two mines, both of which have polluted groundwater). Thankfully, Relman, Dane, & Colfax is really good at fighting against the evil forces of exclusion. A federal court jury returned verdicts totaling nearly $11 million against the City of Zanesville, Ohio, Muskingum County, Ohio, and the East Muskingum Water Authority for "illegally denying water service to a predominately African-American community on the basis of race." The jury also awarded $80,000 in damages to Fair Housing Advocates Association.
As with Thompson v. HUD, maps played a key rule in making the case. In the map below, you can clearly see that the water line stops where the black peoples' homes start: 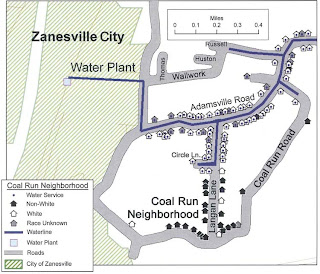 Posted by Interboro Partners at 5:00 PM