On September 10, 2008, a popular playground at the Stadium Place YMCA in the Waverly neighborhood of Baltimore was burned to the ground in what was almost certainly a senseless, cold-hearted act of arson. Eight months later, in a touching expression of community solidarity, thousands of volunteers came together to rebuild the playground, which, I'm happy to report in July 2010, appears active and healthy. (My girlfriend's house is about 300 yards north of the playground, so I pass by it often, and feel an attachment to the neighborhood.)

That there is such a large, popular playground in Waverly, and that so many people volunteered so much time and hard work to its erection is a much more important story than the one I am about to tell. Nonetheless: on a recent walk past the playground, I was disturbed to find that the playground is protected by not one, not two, not three, but FOUR fences.

My camera isn't good enough to capture all four of them, but here are three: 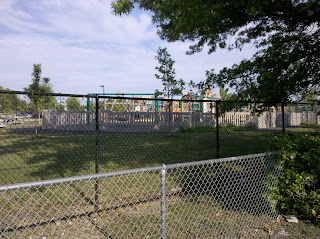 The question I would like to pose is: does this make the playground any safer?

The problem is that the designers of the playground sacrificed accessibility, visibility, and diversity for control, when it is the former three qualities that create safer environments. What we have is a fortress that is thoroughly disengaged from the everything around it, and that discourages all but the most dedicated park goers from making use of the space. To access it from the north or the west, one has to circumnavigate the YMCA, and walk behind the building to an interior parking lot. And while the playground is surrounded by the YMCA, an elementary school, an assisted living facility, and a neighborhood street of attached rowhouses, it does not "talk" to any of them. (A new baseball field that is being built by Cal Ripkin over the former Memorial Field where the Oriels used to play looks like it will be similarly disengaged.) In sum, the playground is a fortress (a fact that is nicely mimicked by the playground's architecture, which makes use of castle motifs): 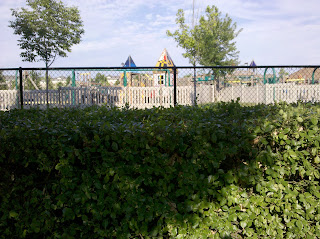 Again, the bigger story is that there is a playground here. But a safer, better-used one could have been built with a few less fences.

Oh, and the highly-reflective glass on the YMCA doesn't help to de-fortress the space! 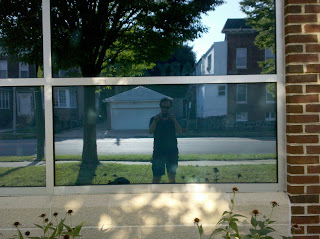