Sometimes when I have to explain what the Arsenal of Exclusion is, I use the example of the "NO LOITERING" SIGN, because it is a clear example of something that restricts access to space, and delegitimates an activity--loitering--that is a perfectly legitimate, and in some cases desirable form of social interaction (if you don't believe me, read William Whyte's City: Rediscovering the Center).

Anyway, a student of mine alerted me to this most interesting "NO LOITERING" SIGN on Baltimore's North Avenue: 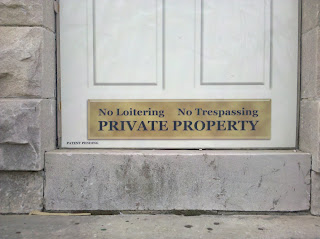 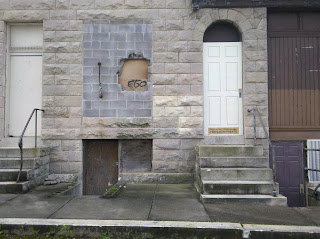 At the bottom of this sticker of a door--which has been applied to hide the fact that the rowhouse has been boarded up and lacks an actual door--is a "NO LOITERING" SIGN. That is to say that the archetypal, generic, lowest-common-denominator door--the kind of door that you make when you mass produce anonymous, two-dimensional, one-to-one scale door simulacra--is actually a door with a "NO LOITERING" SIGN affixed to it.