I biked to Hollander Ridge to see this wrought iron perimeter fence: 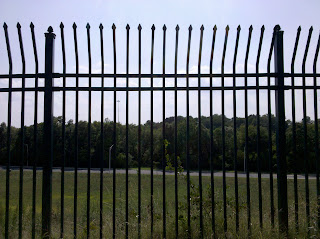 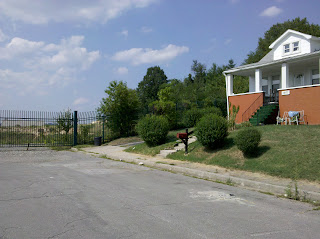 I learned about this fence while reading Judge Marvin Garvis’s Thompson v. HUD decision, which devotes 12 pages (out of 322) to its remarkable story.

In 1998, HABC, with the approval and financial support of HUD, Senator Barbara M ccluskey, then Mayor Kurt Schmoke, the Rosedale Community, and a few Hollander Ridge residents constructed the 8-foot tall, spiked, wrought iron fence around the perimeter of Hollander Ridge to separate it from the adjacent, predominantly white suburban community of Rosedale. The result was something very strange and perhaps unprecedented: a gated community created by outsiders to keep insiders in (well, I suppose a prison is a precedent for this).

The fence is the product of a HUD pilot project to seek solutions for crime in HUD-supported public housing. HUD, with feedback from HABC, selected Hollander Ridge as the focus of the pilot, and the Department of the Treasury deployed a Secret Service team to study the site and make suggestions for improving public safety. By that time, crime was rampant at Hollander Ridge. Garvis describes "check days" (days when elderly residents would receive their monthly social security checks), when “the high-rise area was, in effect, an open air drug and sex market.” The Secret Service Team’s report, entitled “Operation Safe Home," confirmed the existence of serious public safety problems at Hollander Ridge, and recommended, among other things, that “A fence perimeter [be established] around the community limiting pedestrian access.” It was built in 1998.

But the fence—which cost as much as $1.7 million according to a Baltimore Sun article—wouldn’t have been built had the white Rosedale residents not organized and complained that the city-county line was too porous, and that the crime from Hollander Ridge was lowering Rosedale property values, and making Rosedale less safe. As Garvis notes, while some were motivated by legitimate concerns (in 1996 an elderly Rosedale woman was slain in her home), “certainly, some of these Baltimore
County residents were motivated by racial animus directed against the African-American residents of Hollander Ridge."

And how. Thinking about it, I'm reminded of John Carpenter's 1981 anti-urban classic Escape from New York, which posits New York City as giant, maximum-security prison, complete with fortified bridges and tunnels to keep the riff-raff out of the suburbs on the other side. (Remember the scene when The Duke, played by Isaac Hayes, gets sprayed with bullets trying to climb the border wall?) It also makes me think of Kenneth Jackson's essay “Gentleman’s Agreement,” where Jackson writes that although they are not physical boundaries, “the boundaries between our cities and our suburbs are as real and effective as both the fortifications of medieval Europe or the gated communities of our own time.” This 8-foot tall, spiked, $1.7 million wrought-iron perimeter fence built along Baltimore’s city-county line is a surreal landmark that--like Detroit's infamous HOLC wall--speaks volumes about race relations in metropolitan America.
Posted by Daniel D'Oca at 10:51 AM