Interboro has been doing a lot of research on aging in New York City. Our research focuses on the phenomenon of Naturally Occurring Retirement Communities (NORCs) and the Social Service Providers (SSPs) that serve them. Our thesis is that by retroactively servicing buildings with the sorts of amenities that aging adults would otherwise move to purpose-built retirement facilities to access, NORC SSPs keep the elderly in the city, and thereby contribute to generational diversity.
To research this, we have been visiting a lot of NORCS, where we talk to elderly residents, interview NORC SSP Directors, and study how the elderly experience the city. We always walk away from these site visits with new entries for the Arsenal of Exclusion / Inclusion.
Here's an example: last week, we interviewed Ron Bruno, Director of Morningside Retirement and Health Services, Inc., the NORC SSP that serves elderly residents of Morningside Gardens, a 982 unit, multi-racial, middle income housing development in West Harlem. Ron mentioned that when Morningside Gardens opened in 1957, it was something of a safe haven for interracial couples and same-sex couples (many of whom still live in the development). If this doesn't sound shocking, remember that in 1957, plain old interracial housing--whether public or private--was controversial, and hardly the norm. Most of New York City's housing (and all of Baltimore's public housing) was segregated by race. Interracial housing that welcomed interracial and same-sex couples would have been unheard of. Morningside was way ahead of its time. How did this happen?
As it turns out, this amazing piece of history is under-researched, and so far as Ron or I can tell, it isn't known exactly how it happened. Was there an official decree? Was there a pioneering couple who disseminated word in the interracial and same-sex communities that Morningside was very tolerant? I see a dissertation in the making. (Morningside's tolerance was a news topic for a short while in 2003, when two residents of Morningside--Gustavo Archilla and Elmer Lokkins--got married in Canada after living together for 60 years.)
From a 2008 essay by a journalist (and Morningside tenant) named Beatrice Gottlieb called "The Historical Background of Morningside Gardens," we learn that the project's sponsors (Barnard College, Columbia University, Corpus Christi Church,International House, Jewish Theological Seminary, the Juilliard School of Music, Riverside Church, Teachers College, and Union Theological Seminary) had envisioned a residential community that would be attractive and convenient for their own employees, but were disappointed by a lukewarm response. "There were, however, many applications from others, some of whom expressed interest in the project’s social point of view and enthusiasm about a 'real cooperative.'"
Interestingly, Morningside Gardens has always been pretty racially integrated. A 1950 survey of the 36-square-block neighborhood that defined the Morningside Manhattanville redevelopment area (part of which was cleared to make way for the projects) found the area to be 27 percent Negro, 22 precent Spanish-speaking, 4 percent Oriental, and the remainder, non-Puerto Rican white. The original tenants of the Gardens were 75 percent white, 20 percent black, 4 percent Asian, and 1 percent Puerto Rican. Today, Ron estimates that there is a similar racial mix.
NORC SSPs, middle-income housing, and integrated housing are integrative in and of themselves, but when combined with the sort of tolerance demonstrated by Morningside Gardens, they are even more so. 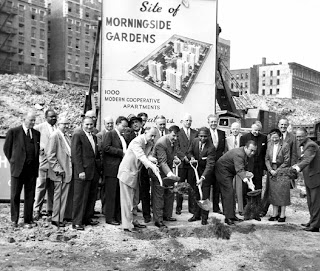 Posted by Interboro Partners at 11:55 PM