Hollander Ridge's PERIMETER FENCE--which I wrote about in the previous post--is only one chapter in the former housing project's amazing story. Another crucial chapter has to do with its SITE SELECTION. What you first notice about the site is that it is totally separated from its surroundings. Here's how a HUD consultant described it in 1996: “Hollander Ridge is located on the far northeast edge of the City of Baltimore on a parcel of land bounded by expressways on two sides and a major arterial road (Route 40) to the south. . . .The property is approximately four miles from downtown Baltimore, but effectively cut off from the rest of the city by Interstate 95.

Take a look at a Google aerial of the site: 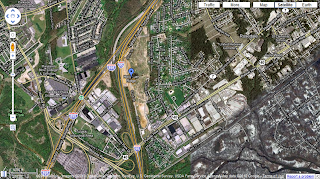 Hollander Ridge's isolation isn't (or wasn't) coincidental. On the contrary, it was the result of a compromise of sorts. In the 1970s, HABC was under pressure to site public housing in "non-impacted" areas: areas that weren't overwhelmingly African-American and poor. In fact HUD decided that it would not grant approval for new public housing units in impacted areas unless those units were balanced by units in
white neighborhoods. A HABC official put it this way: "As our urban renewal effort is presently devoted almost exclusively to inner city areas where our city’s worst housing is located, and as we try to provide housing for the same economic group which is being displaced . . ., there is a great need for new public housing units in these areas. Because of the HUD’s requirement, it was necessary . . . to find a site in a White neighborhood for a large number of units to balance the significant amount of housing to be built on urban renewal lots."

Hollander Ridge, which is in a white census tract in a non-impacted area, was conceived of from the start as a development of "balance units" that would win HABC favor with HUD. But again, a compromise was made. Here's the HUD consultant again: "Although technically a non-impacted site, it is an extremely isolated location that is inconvenient to schools, churches, shopping, laundry facilities, or other services, especially for those without cars. Vehicular access to the site is provided by a guarded checkpoint on the north side of Pulaski Highway (Route 40). Originally, the property was also accessible through residential streets that served the Rosedale community to the northeast. However, because of crime problems over the years, these access points have been blocked by barricades."

I don't want to come down too hard on HABC here, for whom siting public housing in non-impacted, white areas was virtually impossible, and who had to make the sorts of compromises alluded to above. Clearly, the real enemy here is home-rule, which gives racists the ability to exclude in the first place. Still, Hollander Ridge was a terrible, terrible place to site public housing, a fact perhaps best evidenced by the fact that it was imploded at the ripe old age of 24.
Posted by Daniel D'Oca at 2:11 PM